“The Armed Forces of North Korea; On the Path of Songun” (2020) by Stijn Mitzer and Joost Oliemans 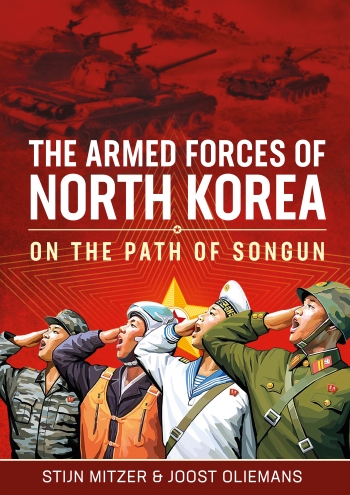 Considering how much of an issue North Korea is on the international stage – and has been for generations now – there is a real lack of good information on that country’s armed forces. Seeing as foreigners hardly ever go to the country, and then only under great restrictions, it isn’t all that surprising. This is where “The Armed Forces of North Korea; On the Path of Songun” is a quite excellent piece of work.

The book provides as exhaustive an examination as is feasible on a military which is notoriously secretive. Not only does this publication give information on the current state of the North Korean military, it also charts and explains its history and the various weapons programs the country has embarked upon in the past to reach its current arsenal. That is remarkable, especially – as pointed out – there are few solid existing sources.

The book covers all four services of the North Korean military, including their nuclear rocket forces, and features a dedicated chapter to the country’s huge Special Forces establishment. The content is excellent. Each service history is written on, then its combat doctrine and evolving and current status. And many surprises are to be had.

As a vaguely interested watcher of North Korea, I had always assumed that their military was equipped with old Soviet and Chinese weapons. This is only partially correct, and the authors go into detail on many of the North Korean efforts at indigenous production and how many of their weapons, though generally evolved from other designs, are actually unique. In fact, when one reads this book one is impressed by how much the North Koreans have achieved despite their isolation.

Additionally, the book has plenty of excellent quality pictures and illustrations on the various topics covered, which really help understand the subject material. The writing is concise and in many ways this book looks and reads more like a popular history book than an academic tome. But that attitude is deceptive as the quality of the book and its contents means that I personally found that it is great for picking up and opening at random to discover some new, previously unknown fact or detail.

My main reservation on “The Armed Forces of North Korea” was how the authors obtained accurate information for research. As mentioned, proper and accurate publications on this subject are limited. Instead, the authors have combined multiple sources, often online, for the information they use. That can be a treacherous approach. There is a reason why books rely on peer review and build on existing work – it cuts down on major flaws in the published information.

But I believe that Mitzer and Oliemans have done an excellent job sifting the available information to give as accurate a picture on the state of the North Korean military as is possible.

If you have any interest in North Korea, or on the political/military situation in the Pacific region, I would say this book is a must for reading. But even if you have only an interest in general military history, or even a specific area such as tanks or other weapon systems, this is a great addition to your bookshelves.