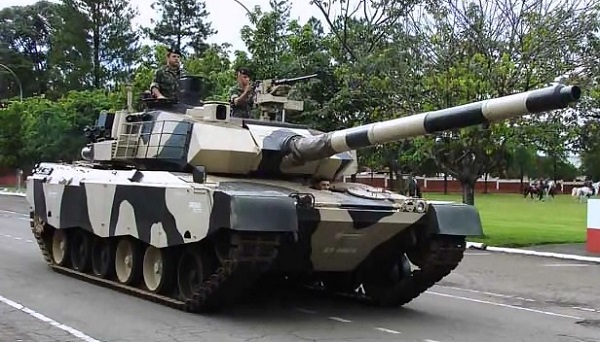 The Brazilian Army has issued specifications for a new battle tank. The vehicle needs a crew of four with a combat weight of less than 50 tonnes. It should have a top speed exceeding 60 km/h (37 mph), a range of 400 km/250 miles and the ability to ford to a depth of 1 m and to be able to traverse a ditch or trench up to 2.5 m wide at maximum load.

The Brazilians have also said they want the tank to be equipped with a 120 mm smooth bore gun, a coaxial 7.62 mm machine gun and a remote weapon station fitted with a 12.7 mm heavy machine gun. The tank should also have fitments like smoke grenade launchers, NBC and battle management systems and a low thermal and radar signature.

The Brazilian army currently operates over four hundred Main Battle Tanks (MBTs), composed mainly of German Leopard 1s, with some 90 heavier American M60A3s also in service. Both are armed with the 105 mm gun, which was pretty much the NATO standard until the 1980s.

Though they have seen substantial updates throughout their life spans these vehicles all have designs that date back to the 1960s and so are all getting somewhat long in the tooth.

Most countries that have updated their armour fleets have acquired some of the vast stockpiles left over from the Cold War, generally German Leopard 2s or the American M1 Abrams. Purchases of new tanks have generally been for political or relationship purpose such as Oman buying the Challenger 2 from the UK and the UAE buying Leclercs from France.

Those looking for a bargain in new tanks have generally gone for Russian designs like the T-90 or else the Chinese VT-1/MBT-2000.

But most of the tanks being built today or else or the surplus market are far too heavy for their requirements, with the Abrams, for example, coming in between 67 and 74 tonnes, depending on model. So the Brazilian requirement is intriguing.

In a world where comparatively large orders for new MBTs are rare the competition looks to be quite a valuable one for whichever manufacturer can meet it.

There is another factor of interest. Currently, there are no tanks in production that fully meets the Brazilians requirements.

It’s possible that the Brazilians will relax some of the restrictions, but we have to assume that they have surveyed the options and drawn their requirements accordingly. As a result, we can assume they will not be interested in vehicles that hugely exceed the weight requirements, like the Turkish Altay or South Korean K2.

So let’s look at the likeliest options: 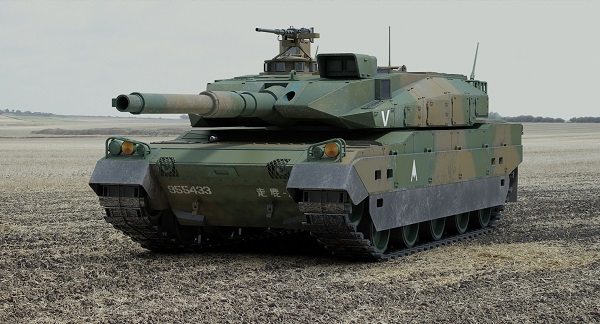 The Japanese Type 10 is a strong contender.

Coming in at 48 tonnes fully loaded this vehicle looks almost ideal. It only has a three-man crew, using an autoloader instead of a loader. But seeing as all the tanks on this list only have three-man crews, it seems likely that the Brazilians will have to accept that factor.

The Type 10 features a high technology nano-crystal steel/ceramic composite armour and electronic suite that would probably be more likely to be found in a fighter jet.

It is armed with a 120 mm gun that is capable of firing all of the standard NATO ammunition, as well as a specially designed anti-tank round that is, according to the Japanese, superior to other munitions on the market.

The Type 10 was also expressly designed for use in country where bridges and roads can’t support full sized MBTs and this is no doubt what the Brazilians are looking for. What the Japanese have done is squeezed a quart-sized MBT into a pint-sized frame.

Of course, to achieve this the Type 10 is expensive. Really expensive.

The Japanese Self Defence Force has only built 103 Type 10s since it entered service in 2012 and no one else has placed any orders. So it remains to be seen whether the Brazilians want to spend the sort of money necessary to buy this sort of capability in such a compact package.

A more reasonable options in terms of cost is the Ukrainian T-84 Oplot Yatagan. 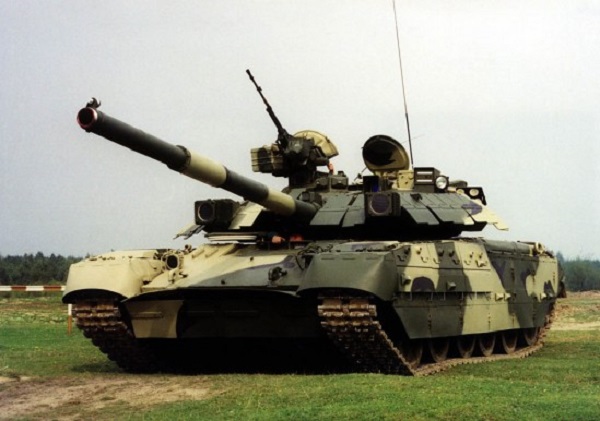 Weighing 46 tonnes, the Oplot is an update of the Soviet T-80 of Cold War fame. Normally equipped with a 125 mm gun, the Yatagan is an export variant fitted with a 120 mm gun to entice customers who want to use NATO standards. The Oplot has been exported to Thailand and the Ukrainians have competed in several other nations bids, keen for foreign sales.

However, the uncertain situation in Ukraine at the moment always offers the possibility of vehicles under construction being requisitioned by the Ukrainians should their conflict with Russia flare up. It also offer the possibility of disrupted supply chains.

Perhaps unlikely, but still a consideration for a prospective customer.

In the notionally unlikely possibilities is the Chinese-built VT/2, the export version of the PLA’s Type 96A tank. 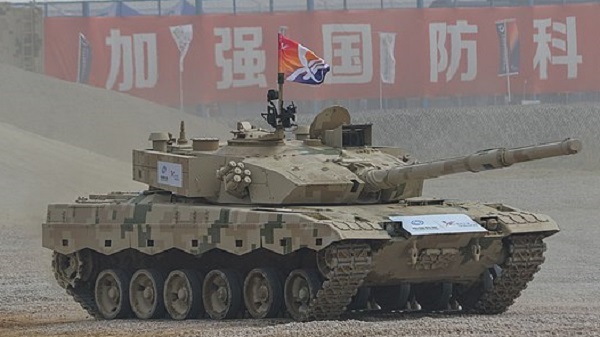 This tank comes in at around 43 tonnes, has good mobility and is reputed to have a good electronics fit. It is also in widespread production for the PLA and export customers and therefore there should be no concerns on either securing spares or on costs.

However, currently the tank features only the standard Chinese 125 mm gun, which on paper excludes it from the running. But the Chinese have shown themselves happy to oblige customers’ requirements. Integrating a NATO gun would be entirely possible for the right customer.

Plus the Chinese policy of engaging with other nations through arms sales, as well as their deep interest in increasing influence in South America – particularly resource rich countries such as Brazil – means that they may well put a bid in that is truly irresistible to the Brazil government.

Perhaps the VT/2 isn’t so unlikely after all?

Of course, the Brazilians might decide that they don’t need such heavily armoured behemoths and opt for something lighter.

Based on an Infantry Fighting Vehicle and technically more of a light tank, the CV maxes out weight wise at 40 tonnes with various add-on armours, so is actually on the light side. Again, it has a NATO compatible 120 mm gun, as well as the required secondary armament. Plus, as it is based on an existing vehicle that is wide spread service, purchase and service life costs are going to be much more reasonable.

The main issue is the armour, which with modular additions is respectable against shaped charge warheads such as found on light infantry anti-tank weapons, but it would likely suffer in an armoured slugging match with proper MBTs.

So it depends on what the Brazilians see as the main role for the new vehicle. As a true tank the CV would probably be found wanting. But seeing as the Brazilian army probably isn’t going to be fighting a blitzkrieg anytime soon, it might well fit the bill.

There is also another option that may be considered. 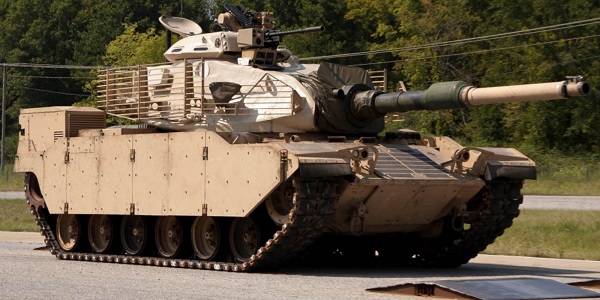 Several manufacturers offer upgrade packages for the M60 which improves the automotive, electronic, armour and firepower of this venerable tank, in many cases effectively making a new vehicle that is capable of holding its own against modern tanks.

Coming in at about 50 tonnes when modified, the fact that it is in service already with the Brazilian Army means that they are already used to operating this vehicle. They therefore have logistics and experience in place that can be used, rather than transitioning to a brand new MBT.

Additionally, the Brazilians have long experience of upgrading their tank fleets, the X1A series being great examples.

M3 light tanks dating from the 1940s, these were totally rebuilt and served into the 1990s.

The biggest irony is that there used to be a tank that almost perfectly met Brazils requirements.

It had a 120 mm gun, a four man crew, composite armour, excellent mobility, weighed about 44 tonnes and had a state-of-the-art electronics fit. 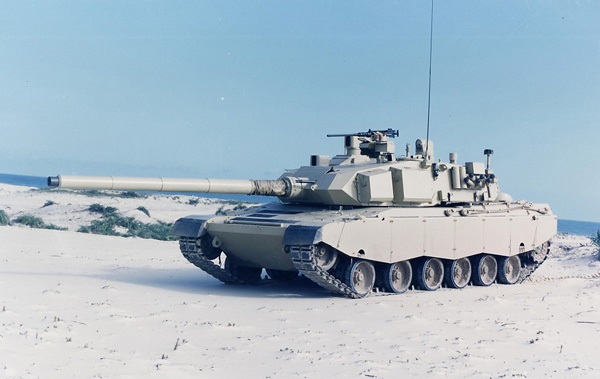 Two prototypes were built in the 1980s with the Brazilians hoping that export sales would allow them to set up the production line cheaply and provide them with a tank custom built for their own requirements.

It was a good plan that was doomed by timing.

The end of the Cold War meant that suddenly cheap tanks were easily available on the open market. A prospective sale to Saudi Arabia fell through when the M1 Abrams was selected instead and the Osorio was shelved. A pity, as it appears to have had a lot going for it.

So now the Brazilians will begin the search for a tank that best fits their requirements. It will be interesting to see what they choose.