An Absolute Cracker of a Resource for Naval Historians; Armouredcarriers.com

There is well grounded reasons for researchers to treat with suspicion web-based sources. Lack of citation and accountability means that one can pretty much say whatever one likes on the web. But there are websites out there that provide truly outstanding material. Armouredcarriers.com is the perfect example of how web resources can provide historians and other interested parties with first rate information for their research.

The website covers an area that, by its own admission, tends to get brushed over in a lot of the histories – the development and use of the armoured aircraft carrier by the Royal Navy in the Second World War. Compared to the titanic carrier battles fought between the USA and the Japanese, it is perhaps unsurprising that this subject does receive comparatively little coverage.

The Royal Navies carriers tended to be built around a different concept than their rivals from other nations, with heavier emphasis on protection and carrying smaller air groups with aircraft that the consensus tends to dismiss when compared to their American and Japanese equivalents.

Armouredcarriers.com aims to redress the historical imbalance by offering excellently researched articles on the development and use of the British carriers, backed up with a mass of documents and accounts that the site either features directly or links to.

In fact, the website gives an excellent example of the advantages web resources can offer over traditional history books. Not only can sources be cited, they are linked to so as to allow a researcher to read the original material themselves or, in the case of books, provide links to purchase directly.

Not only does the website provide information on the carriers and their use, but also provides excellent analysis on British naval aircraft, again from development to usage. This is particularly interesting as it gives real insight into types such as the somewhat maligned Fairey Fulmar, demonstrating a balanced appreciation of the aircrafts failings and successes.

Additionally, there are some real gems to be found, such as the testimony of William Taylor, USNR, who served with FAA before returning to the American fleet and his report on the use of radar by the British early in the war to disrupt attacks on their naval bases, as well as an account of the “USS Robin”, a joke code name for HMS Victorious when she was assigned to support the US Navy in the Pacific due to losses suffered in 1942. 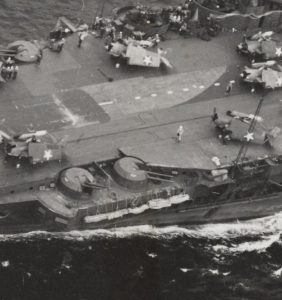 The “USS Robin”. Note the US markings on the FAA aircraft.

To be honest, I could continue to roll out examples which I’ve found fascinating from this website, but honestly you’d be better going and looking at it yourself. If you have an interest at all in naval warfare, aircraft carriers or the Second World War, check it out.

It is certainly one that I will continue to explore, plus the developer is continuing to add to it, so I shall look forward to reading their new material into the future. A truly splendid website!