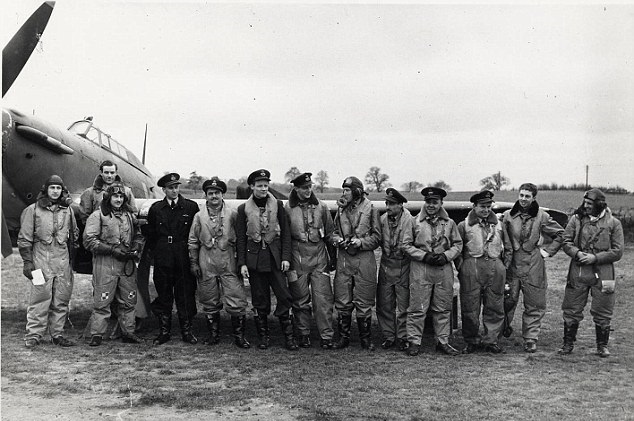 If you’ve seen the movie “Pearl Harbor”, you may be under the impression that the Battle of Britain was won by Ben Affleck, the plucky American who selflessly saved the Brits from the Luftwaffe menace.

But please remember that Pearl Harbor is, quite famously, hot garbage!

Hollywood aside, there is actually a long history of American airmen fighting with foreign air forces.

I’ve already done an article on Bob Short, who died in 1932 defending Chinese civilians from a Japanese bombing raid.

Short was the first of a number of American that would fight for the Chinese throughout the 1930s, culminating in the famous “Flying Tigers” of the American Volunteer Group.

But there are even earlier examples.

During World War One the famed Lafayette fighter group was formed of American volunteers who flew for the French Air Force.

So popular was the unit, with so many American’s volunteering, that many were sent to other French squadrons.

The keenness of American flyers to fight was remembered after the war when France became engaged in a brutal colonial campaign in North Africa, the Rif War.

A famous American mercenary, Charles Michael Sweeny, helped raise a volunteer squadron for the French, with sixteen pilots being recruited.

This move was not popular in the United States and the unit was notionally attached to the army of the Sultan of Morocco.

But things came to a head when the squadron bombed a rebel town, causing outrage in the US and forcing the squadron’s disbandment in 1925.

The outbreak of the Second World War in 1939 saw many Americans keen to fight against the threat of Fascism.

But America, with an isolationist policy and wanting to avoid getting dragged into another European war, was not going to be involved any time in the immediate future.

Step forward another Charles Sweeny, the nephew to the already mentioned international mercenary.

Unlike his uncle, Charles the younger had remained in the family business – which was business. BIG business.

Living in London at the outbreak of the war, Sweeny junior had refused requests from the American ambassador to return to the States and instead had formed, funded and armed a volunteer unit of American expats with the view to fighting any German invasion as part of the British army; the First American Motorised Squadron.

By Sweeny’s own admission it was probably fortunate that this unit never saw action.

But his impeccable political and business connections, as well as his access to the vast financial resources of the Sweeny family fortune meant that even before the Battle of Britain begun Sweeny was putting wheels in motion in regards to forming an American volunteer fighter group;

As he wrote in his autobiography:

“…there were far more young men who had flying experience in the US than in any other country and I was sure that many of them would be eager to volunteer to fly with the RAF.” [1]

And he was also to receive help in this from another family connection; his uncle, Charles Sweeny the mercenary.

Uncle Sweeny had already been on a mission to recruit pilots in the United States for the French air force. Originally intending to reforge the Lafayette group, Sweeny senior had been undone by the sudden collapse of France, with only a handful of his recruits making it to that country before the defeat.

But Sweeny’s profile and experience in raising these sort of volunteer units and funneling recruits meant that he had managed to assist in putting in place the organisation to start recruiting the pilots necessary  – and all despite a positively hostile reception from the US government to his presence.

So it was that an almost perfect fusion of military experience, funding, organisational capability and political connections came together in the shape of the two men; uncle and nephew.

They were also right in their assessment of the willingness of American pilots to join up. Thousands applied, far more than would go to the Eagle Squadrons.

Many of these would serve in either the Royal Canadian Air Force or RAF in other squadrons and roles.

As Philip Caine point out in his excellent book on the subject, American Pilots in the RAF, many were inspired by the accounts on the radio of the aerial battles raging over England.

But many were also motivated by a desire to fly the Spitfire and Hurricanes, recognised as amongst the best fighters in the world at that time.[2]

The first Eagle squadron, No.71, formed up in September 1940 and took on active combat duties in February 1941.

Plans for a fourth squadron were apparently cancelled after many of the recruits were lost when their ship was sunk on route to the UK.[3]

Though too late to see action in the Battle of Britain the three squadrons would see plenty of combat over the next year in sweeps over France and providing fighter cover for the Dieppe Raid in August 1942.

It was shortly after this that the three squadrons were transferred to the United States Army Air Force.

With America in the war after the attack on Pearl Harbor in December, 1941, recruits had dried up as the United States began building up its own forces.

So in  September, 1942, the three Eagle Squadrons transferred to the USAAF’s Eighth Air Force to form the 4th Fighter Group.

By that time 244 Americans and 16 British pilots had served in the squadrons. Eagle pilots had won 12 Distinguished Flying Crosses and one Distinguished Service Order and had been credited with 73 and a half kills.

But the  costs had been heavy. Seventy-seven Americans had been killed, along with five of their British colleagues.  More volunteers had also been killed in training accidents and transiting the ocean.

There were also 16 Americans languishing in German POW camps.[4]

But the experience these flyers had would continue to serve them in their new roles. The former Eagle squadrons would fly their Spitfires until April 1943 in USAAF markings, then transition to the P-47 Thunderbolt and later the P-51 Mustang.

The Fourth Fighter Group would adopt the motto “Fourth but First”, a clear reference to their roots in the Eagle Squadrons, and would prove this true.

The group was credited with the destruction of 1,016 enemy aircraft, more than any other 8th Air Force unit, and produced 38 aces.

Today the unit flies F-15E Strike Eagles, but continues in this tradition. In 2012 the Fourth was the first active duty fighter wing to have a female commander.

And there you have it; the Eagle Squadrons. American who flew and fought for the Royal Air Force.

If there are any lessons to be drawn, it’s this:

It was an American businessman with connections and plenty of cash.